A Few Notes on Probability Theory

Textbook examples in probability theory books tend to deal with artificial problems like tossing a coin or throwing a die. In toy experiments like these, one outcome is entirely independent of the other. In such cases, it is relatively easy to analyze the probabilities of individual events. For example, it is easy to see that a fair coin turns up heads half of the times on average.

Let’s take the example of two coin tosses. Let’s label the event of getting heads in the first toss as and second as . Then the probability of and happening together is defined to be the intersection of and :

This can be visualized using a Venn diagram: 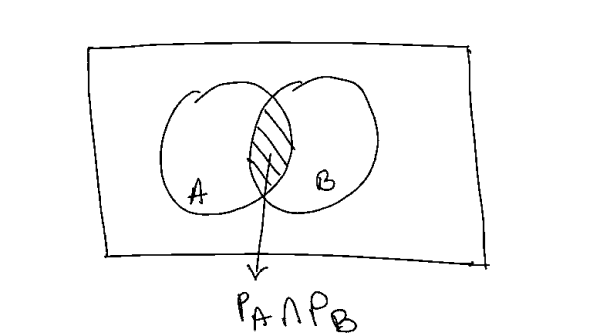 Now we reason that since the first coin toss does not impact the second coin toss in any way so the intersection of two probabilities must be the same as their product:

In this case, the probability of getting two heads in a row will be:

But this result does not always hold. In fact, it rarely holds outside of trivial textbook examples.

Imagine you want to analyze the probability for it to rain today, and you already know that it rained yesterday. Intuitively you know that raining a day before makes it more likely to rain on the present day.

But in the case of the rain, as we saw before, raining a day earlier makes it more likely to rain on the present day. That means:

Represented in the Venn diagram as: 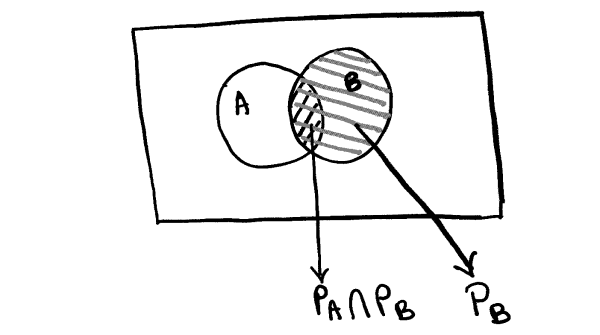 From set theory, we understand that set intersection is commutative. That is:

In this context, it implies:

This result looks very close to a fundamental theorem of high applicability. Bayes theorem is abstract and counterintuitive. I always found it difficult to grasp it fully. Let alone applying it in real problems. But it can be constructed relatively easily using simple equations as we saw above.